Open Climate Tech is a 501c3 non-profit organization focused on building open source technologies that have the potential to help mitigate the adverse impacts of climate change.

Wildfires are getting more destructive over time due to many factors including climate change. Besides the devastating impact on lives and property, wildfires also release significant amount of carbon back into the atmosphere, thus speeding up climate change even further. The goal of this project is to automatically detect wildfires in their initial phase, so the authorities responsible for wildfires can take appropriate action while the fire is still small and easy to manage. This project does not have any opinion on determining the optimal action for each fire.

This project uses machine learning based tools to identify potential smoke from wildfires using real-time images from cameras installed at vantage points, such as mountain tops and cell towers. The information about the automatically detected potential wildfires is displayed on the website in real-time for people to check and confirm whether they are real fires. For real fires, people may wish to inform local fire department. This system has successfully detected some fires before authorities were aware of them, but the system also generates some false notificatons. Therefore, it is useful to have people review the notificatons. This system monitors more than a hundred cameras continuously, and usually generates less than 10 notifications a day. Doing the same task without such a system would require a large number of people continuously staring at real-time images coming from the same cameras and maintain high vigilence throughout. That is the main impediment why these cameras are currently not used for detection, but only for verifying reported fires and for monitoring known fires.

Folks from multiple organizations have contributed to this project during its lifetime - listing some of them here in alphabetical order: FFLA San Diego, HPWREN, and Lawrence Berkeley National Lab.

The detection technique used by this project relies on three machine learning based filters and multiple traditional non-machine-learning based algorithms. The three machine learning filters check for whether an image contains something that looks like smoke, moves like smoke, and whether the current weather conditions are likely to support wildifires. Each of these three are briefly described below. Real-time images are collected from the cameras and checked by the filters. Images that fail any particular filter are discarded immediately, while images that are deemed by the filter to be likely fire are then checked by the next filter. Only images deemed to likely contain fire by all the filters are declared as a potential wildfire by the system.

We trained a machine learning model for image object recognitionon (Inception V3) to detect if the image contains something that looks like smoke. Training requires many thousands of unique images containing real smoke as well as roughly equal number of unique images that do not contain smoke. The non-smoke images are carefully selected to contain things that visually appear similar to smoke so the machine-learing model learns to differentiate between them. We acquired images of smoke from early phases of historical wildfires from these same cameras and cropped them around the fire.

For detection, images are divided into slightly overlapping squares of 299x299 pixels, and the machine learning system computes a value (between 0.0 and 1.0) for each square. High values are more likely to be real wildfires. The system is not perfect and regularly generates false positives, which are mostly triggered by fog or clouds. We are continuously working on improving the accuracy of the system. Below are sample images of both true and false positives. 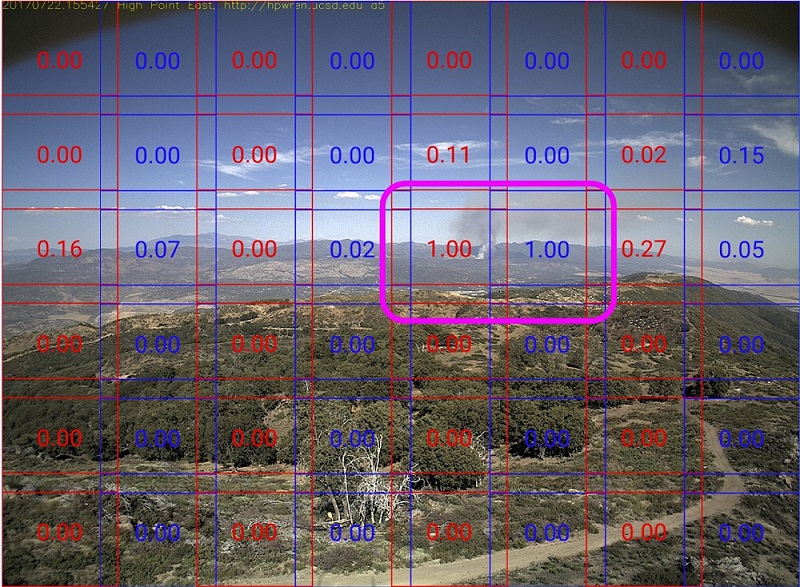 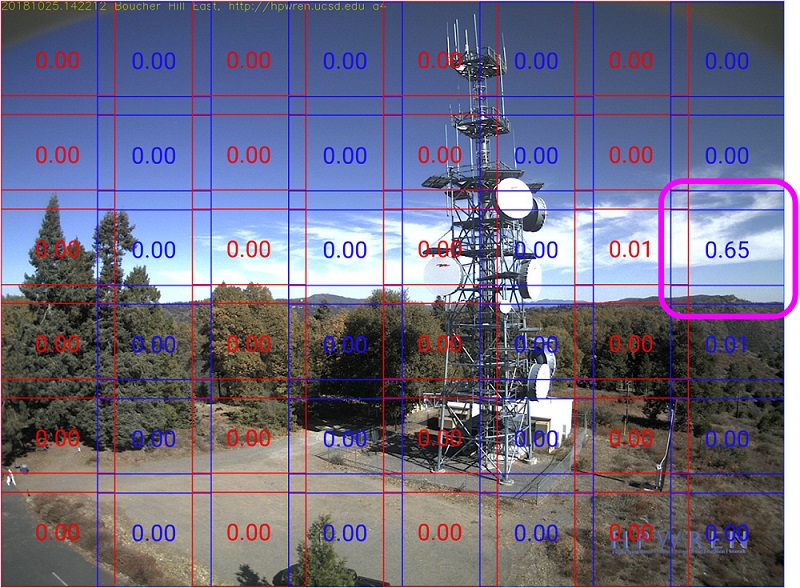 This machine learning based filter uses the same image object recognitionon model (Inception V3) mentioned above, but this time the model was trained on specially prepared composite images that highlight changes between successive images (usually one minute apart) from the same view. Similar to the earlier model, this one was also trained on many thousands of unique composite images containing real smoke from early phases of wildfires and images without smoke. Below are a few sample composite images of smoke with the changes highlighted in red. 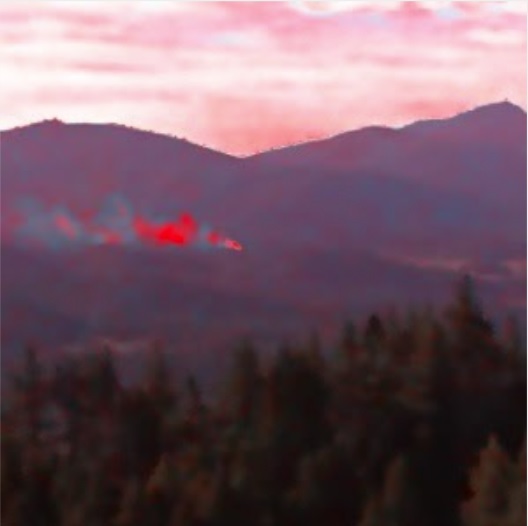 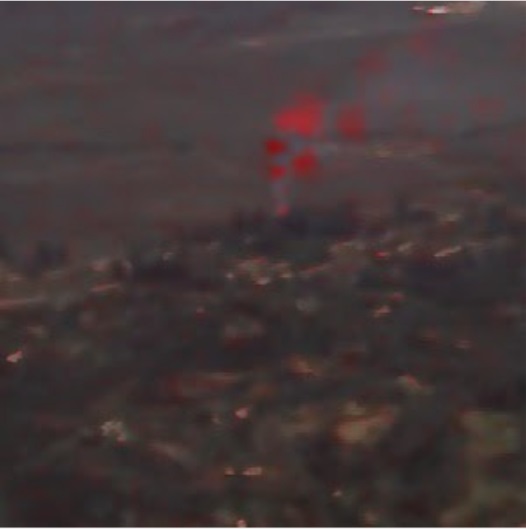 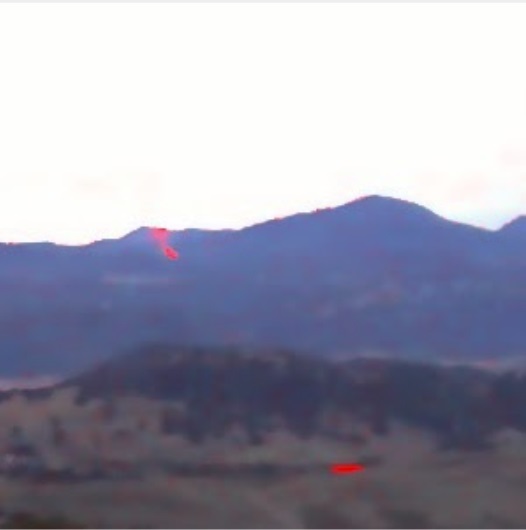 This machine learning based filter uses the weather data (e.g., temperature, humidity, wind, visibility, etc...) at both the camera location as well as the location of the potentail fire. It has been trained with thousands of datapoints of both real fires and situations when false positives were not caught by earlier filters.

The real-time potential wildfire notifications from the detection service are displayed on this live updating site. The display for each potential wildfire event is optimized so users can quickly determine if the event is real fire or a false positive. Each event includes a time-lapse video of previous few minutes of the same area as well as a map with a highligheted triangle indicating the view from the associated video.

The site allows users to vote on each notificaton to indicate whether it was a real fire or not. The events where the majority of the users confirm a real fire are displayed on a separate Confirmed Fires tab. The votes are also helpful for improving the system by retraining the machine learning system with new images. Users can also specify a desired geographical region to limit the notifications to those that may overlap the specified region.

In case someone discovers a real fire that recently ignited, they should consider informing the wildfire dispatch center to take appropriate action. Please note that this site does not alert the authorities directly.

Open Climate Tech, Inc. is a 501c3 non-profit organization that was formally founded in 2020. Although technology alone can't fix all the problems made worse by climate change, we believe technology can help mitigate some of the adverse effects. The projects supported by this organization are developed by volunteers, and we welcome enthusiastic contributors interested in joining existing projects or starting new projects. We believe that open sourcing the technology helps collaboration with other groups and encourages volunteers. All code should have an open source license.

Email info@openclimatetech.org if you have any questions, suggestions, or would like to collaborate.